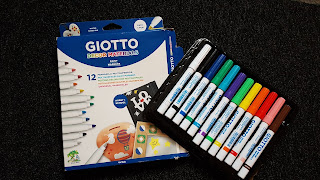 Giotto water-based ink pens for rocks. These were relatively new to me when I first saw them and never did I think they'd be suitable for rocks.

They were purchased for personal use but it soon became apparent that these could be useful for workshops during the colder months when it's not possible to seal the rocks when at workshops.

The first use was the one below which, since the date on it, has been left outdoors in all the elements since. Rain, sunshine, frost, snow, we've had it all. It was also left unsealed and just left as was.

They are sold as:

Fabulous selection of multi-purpose fibre pens. Suitable for use on almost any surface including wood, stone, porcelain and plastic. Water-based ... [Baker Ross website]

However, all I'm interested in is how they fair on rocks.

Below is an image of two rocks, one dark (bottom), one white (top), both decorated using these pens. Only one coat of each colour has been used. And yes, they can take almost as much time to dry as a paint pen.

The images on the right-hand side are of each rock after sealant had been used on the right half only:

As you can see, spraying or sealing the rock (bottom right) did not work very well. The white colour, which takes a few moments to 'develop', has almost gone. Based on this, I would not suggest sealing your rocks if using these pens on dark rocks. The white rock, however, has fared far better.

Here are my personal pros and cons:

Cons:
In conclusion:
If you're working with children and those who, let's face it, will always get messy no matter what, then these pens are for you.