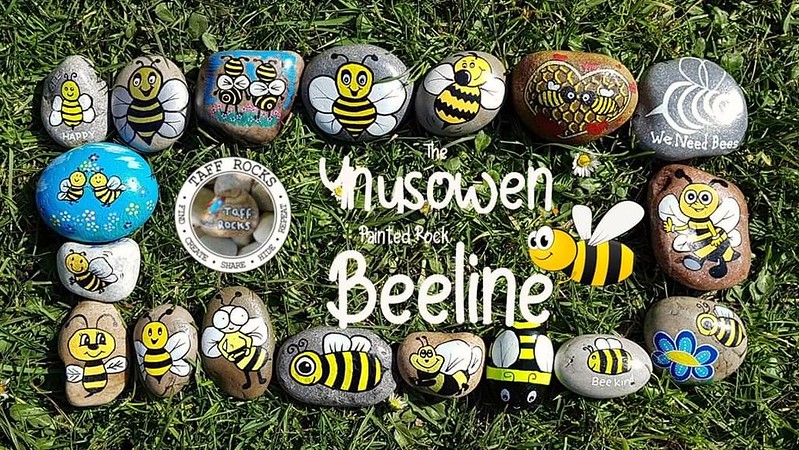 Check out the video above

The event was designed to get different generations and communities working together toward one common goal.

Children and families of Aberfan, Merthyr Vale and Mount Pleasant painted loads of bee rocks and were joined by members of Lichfield Kindness Rocks, families and friends from as far afield as Norfolk plus inspiration from friends of Taff Rocks in the USA.

The total number collected, added and eventually exhibited is listed at the end of the video.

We wanted to reach 200 rocks and a one hundred foot line, check out what the final figure was in the video.

This video has been put together from five different videos of each section of the line. Each and every bee rock, that formed part of the exhibition, can be seen in there, we hope you can see yours. Yes, it's a very long video, over four and a half minutes long, but this was the shortest we could get it to give every bee rock its moment of fame!

Taff Rocks have so many people and organisations to thank, here are just a few, in no specific order:
The rocks left behind, following the exhibition, were transported to the Taff Rocks Painted Rocks Garden and Trading Post. Details here.

This trading post is open to the public and other rock painting groups are welcome to leave, share and trade their rocks to take on journeys and set free or keep. As long as they don't mind sharing a photo on our Facebook Group (not the page).

Why not join Taff Rocks over on their Facebook Group, click on the link in the column on the right or here
Email ThisBlogThis!Share to TwitterShare to FacebookShare to Pinterest